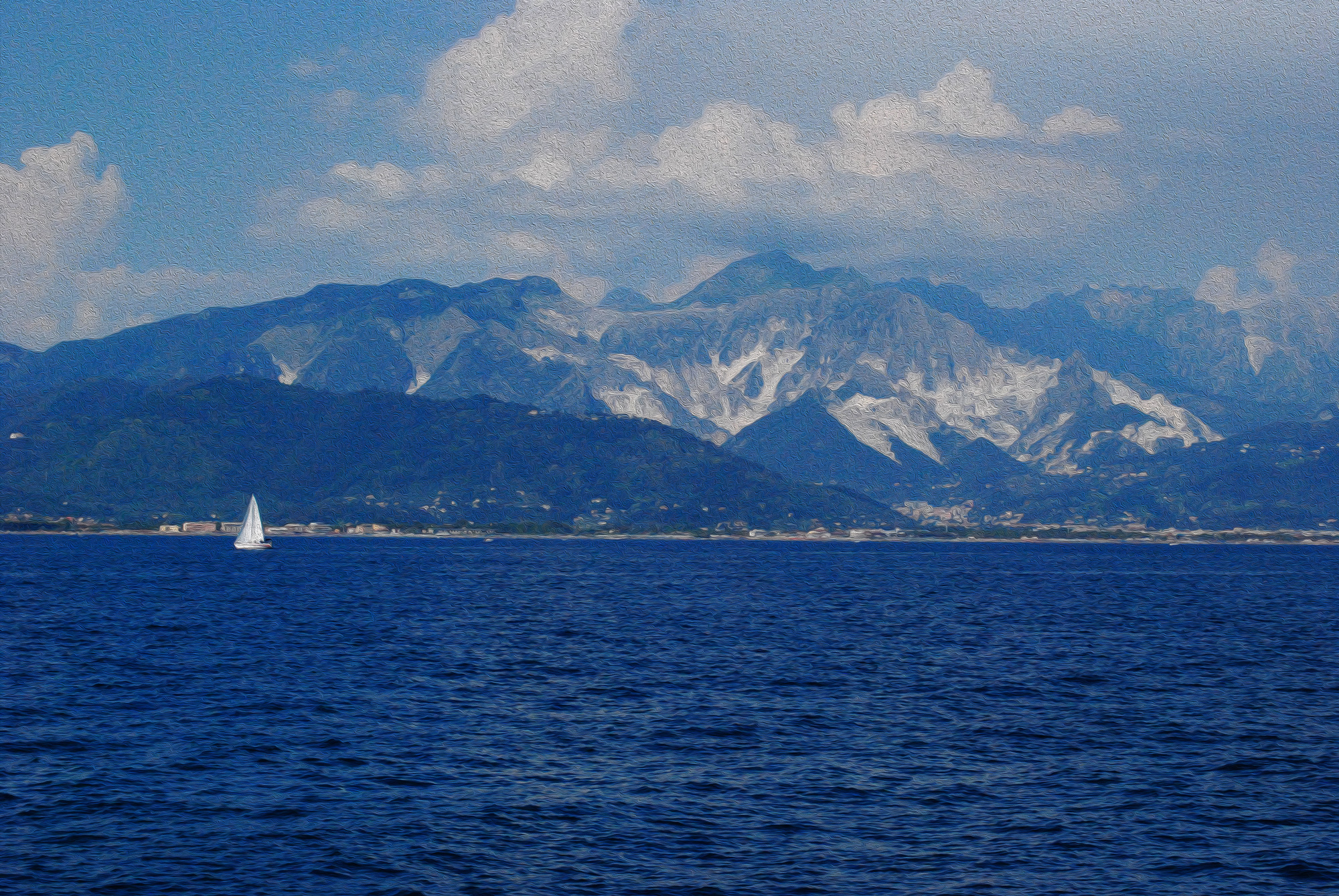 The summer of 2016, I visited Pietrasanta and Carrara to work in the very same quarries where Michelangelo found his blocks for the David. Since I am self taught, I was amazed to visit this area is filled with stone carvers with incredible amounts of knowledge and history.  While I was there we filmed LIFTED, a short documentary by Motion Filmworks on my experiences in Italy. My goal is to carve a marble female figure at the same scale (over 15 feet tall) of Michelangelo’s David called the Modern Athena. A huge thanks to all my supporters for my successful kickstarter campaign Hammer & Stone that funded this trip! Read my trip highlights below…and check out the beautiful images by Maggie Stolzberg Photography

July 6, 2016
Pietrasanta is a Stone Carvers version of Heaven

I arrived to find myself surrounded by a backdrop of mountains and beautiful beaches. Pietrasanta translates to Sacred Stone and is right next to Carrara where marble is actually quarried. I will be working here for the remainder of the month of July. Immediately, I was outfitted with new goggles and shoes the day I arrived bc Italian law requires steel toed boots in all marble studios. And there are so many sculpture studios here that supplies are hand delivered. After my Cinderella moment from the shoe salesman/delivery service, we forklifted my stone into place on my pedestal and I began flying along on my new sculpture of a birds wing.

In the last couple of weeks, I have been through a whirlwind of activity here in Pietrasanta. With the assistance of high quality tools and people to help me lift and move my 5 foot block, I was able to rough out the birds wing and beginning carving feathers in less than a week. There’s over 49 feathers at the moment and still going…

I was also able to visit the quarries in Carrara and see the original marble railroad bridge called the Marmifera. I tagged along and watched as a fellow German artist negotiated the purchase of a 32,000 lb block of marble for a copy of a baroque sculpture in Germany. We visited 6 stone yards and washed blocks to see the color and then climbed up and up into the mountains. The Italians manage to do all this while driving tiny Fiat cars.

I then ended the week with shopping for tools. Stores here are a delight for sculptors. I was able to buy carbide chisels and diamond rasps, proving once again that “Diamonds are a girls best friend.”

I spent my last couple of weeks in Italy working on my marble birds wing sculpture. I am not quite finished but we were able to install pins and erect it on its’ base. This installation technique is new for me and has inspired me to create a whole series of birds wings that in smaller sizes are capable of rotating on their bases. This current wing is close to 5 feet tall and still needs detailing on the exterior of the wing and edges along with polishing, but it will ship back to Chicago in this current state.

Last week the Motion Filmworks team arrived and worked with me for 4 days to try and capture my experience in Pietrasanta and Carrara. We set out to film in the mountains of Carrrara where the marble is quarried and planned to do some standard backdrops by the bridge and a quarry. It was a Saturday and the workers leave by noon, so we stopped at their cafe and I was introduced and began chatting with Carlo Musetti. Turns out Carlo is a lead geologist and in charge of 4 quarries and once we began chatting we simply couldn’t stop. He ended up personally leading us up the mountain to a peak in which the public is never allowed so we could film the magnificent view and fly a drone camera for aerial footage. It was a stunning experience and afterwards he brought us into a marble cave. This cave, in the heart of the mountain, was cathedral like and caused all of our voices to echo. The heat outside instantly vanished bc the mountain drips water all around you onto the damp cold floors.

I’m very excited after many phone calls and emails to have 3,400 lbs of marble shipping back from Italy! My blocks are supposed to arrive in Canada then to Des Plaines Illinois via boat. From there, they will be trucked to Chicago arriving some time between September 6-10 if all goes well. The blocks don’t look like much in the pics below but they are all Statuario or the finest marble for carving sculptures due to the fineness of the grain and detail. The unfinished wing will be arriving too, newly named “Ascension.”

Unfortunately a lot of statuario is being harvested for people’s bathrooms and kitchens and since so much is going to the toilet so to speak…there are no blocks available any more at the size and scale of Michangelo’s David. They have had to resort to different grades for sculptures at that scale. I have a pile of blocks therefore for new wings of various sizes and a 2,000 lb block to work on a 4 foot version of the female figure that I would like to create at the scale of the David, newly referred to as the “Modern Athena.”  All thanks to you my fabulous supporters without which none of this would have been possible 🙂

Lastly…one of my most interesting discoveries…. While in Italy, I learned that Michelangelo used 2 person drills for depth in delicate carving areas like eye pupils, curly hair and ear holes or to create a deep channel like for a fabric fold. I had long wondered how they achieved such delicacy bc a chisel would break the marble and a rasp would take forever. I then noted a bunch of drill holes on Michelangelo’s unfinished sculptures. You can watch the video below to see it in action.