What a journey this past month. Traveling from Chicago to Black Rock City with a sculpture is an experience I will never forget. After many hours of packing, we drove for over 3 days to finally reach Nevada. We decided to take the scenic route thru Nevada via US Route 50 nicknamed the loneliest road in America. Hours went by with almost no signs of human activity. I could not stop staring at the expanse of sky. 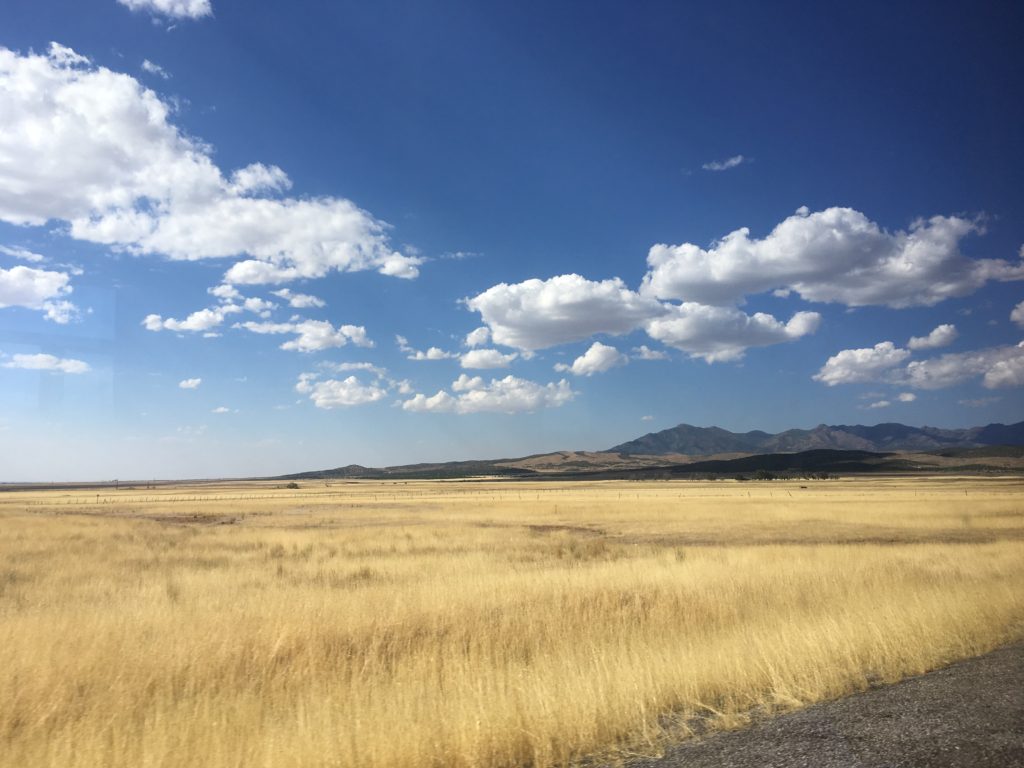 Upon reaching Reno, we gathered supplies before driving another few hours to the entrance of Burning Man. Many trips to Walmart and Home Depot later by 3 in the afternoon, we were headed into our destination. Our greeting was dust storms and lines and after 4 plus hours of patiently standing still followed by brief surges forward, at around 10pm, we finally rolled onto to what appeared to be an empty desert. Faint lights dotted the horizon along with shapes of buildings and sculptures. Early entry as an artist means you actually see the city being built and what we saw barely resembled a camp site.

Here we are waiting patiently… 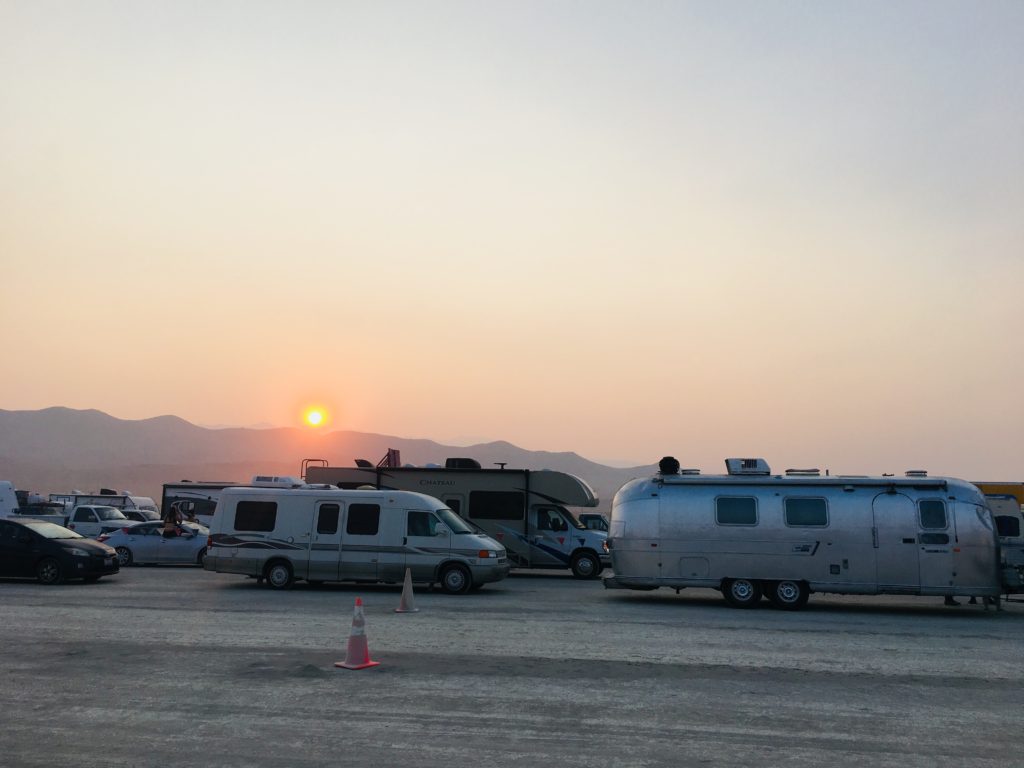 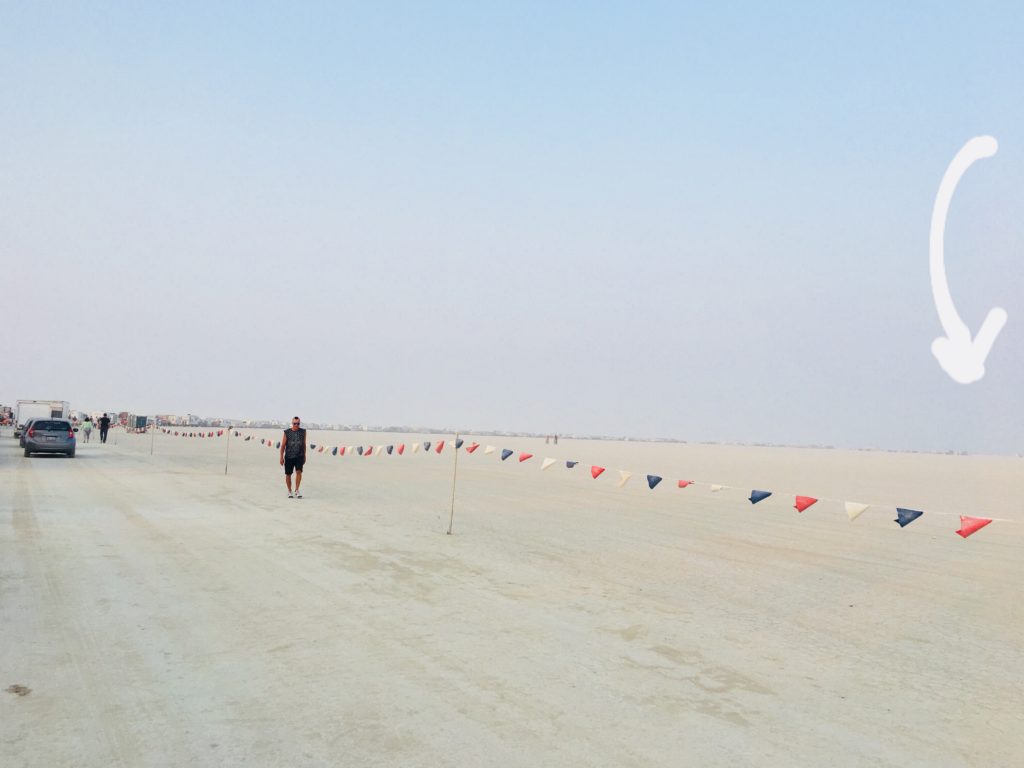 Batoning down the hatches on Friday night with dust flying everywhere, we decided to secure the camp site and build the sculpture during a lull in the storm. That lull never happened and with the deadline looming for completion on Sunday, Zachary and I assembled the benches while waiting for the rest of the team to arrive. The storm created a delay in arrival for everyone and the heat was topping out at 108 degrees, but by midnight on Saturday, the site was prepped and most of the pieces ready to just be attached. After the heat of the day passed on Sunday afternoon, we raised the winged sides in the midst of the storm. We had visibility for up to 20 feet, which was just enough visibility to anchor the benches into the ground. Stanford with his experience in building sky scrapers worked on the anchors with the aid of Shorty’s rachet straps to tie the structure to the ground as the winds began to kick up to over 40 mph. I had the time lapse camera filming away as we built and will release the video this week. The pics below however should give you a glimpse into the conditions. 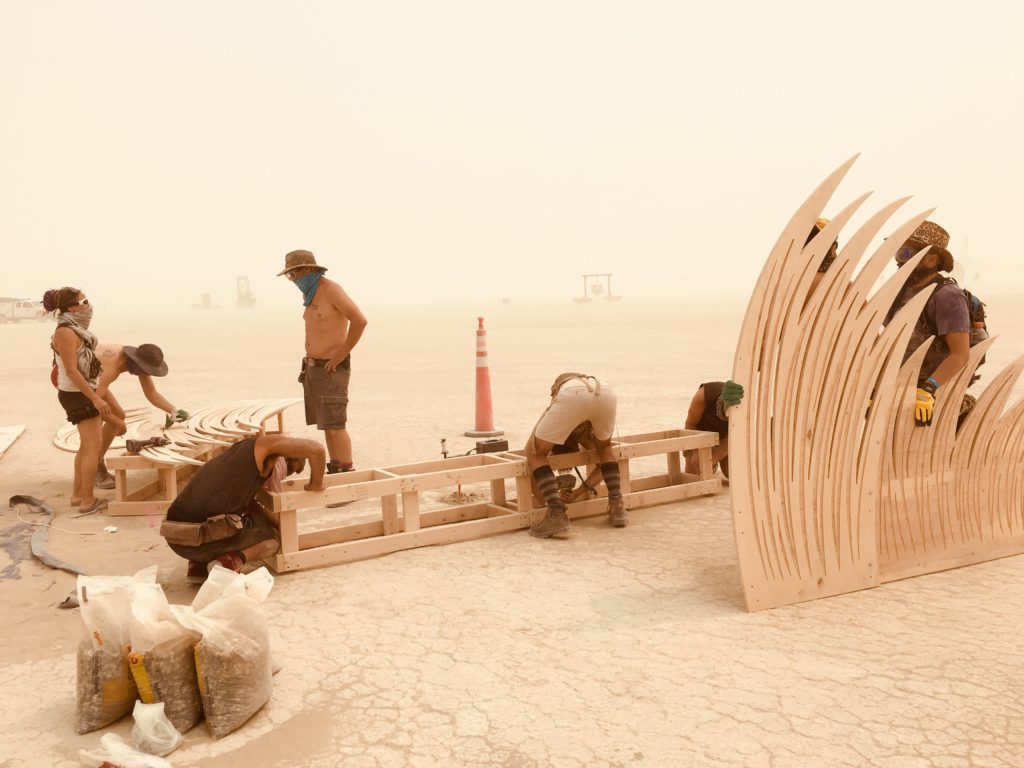 What dusty times. Even with all my years of experience as a professional artist, I have never attempted to raise a sculpture in a dust storm. A far cry from any fine art gallery problems of someone forgetting a track light or a spot on a wall that someone missed for touch ups. Hours later, we were all just grateful for the sculpture to be up and to make it back to camp. 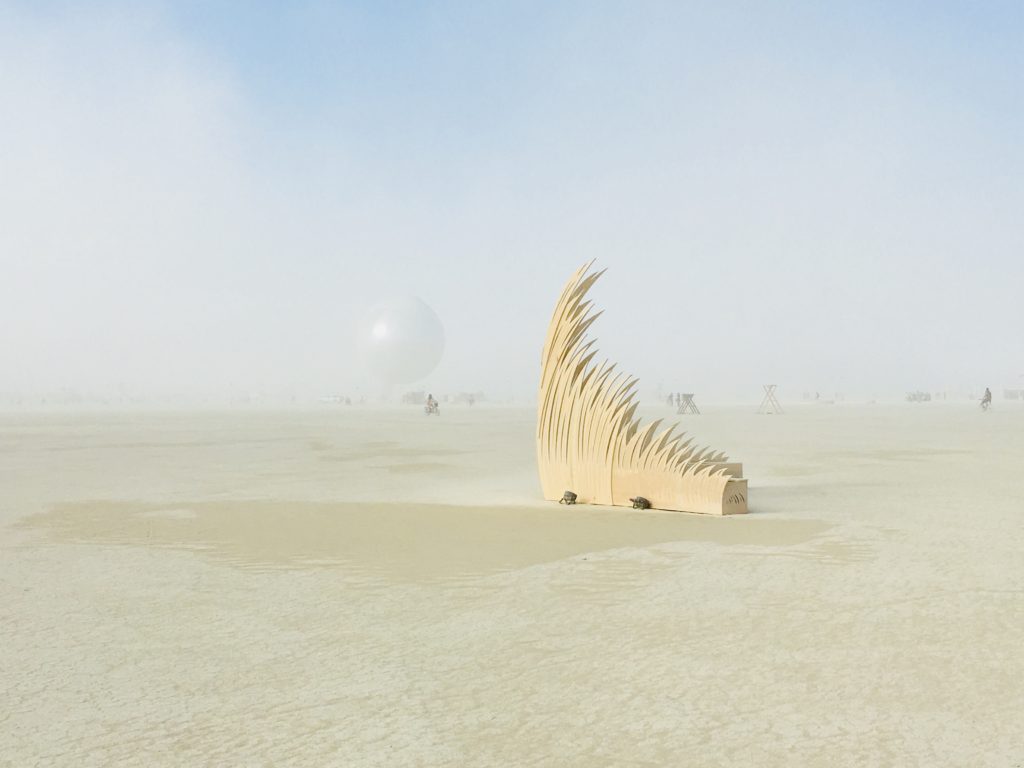 The storms continued thru Thursday, they would abate for awhile and then kick up gusts that you could barely breathe in. However, everyone kept working and the city grew. At the artist reception, I was able to meet other artists and connect with the people behind the planning of Black Rock City. The surreal quality of sipping cocktails in variations of desert finery was not without the ever present sound of wind.

As the week progressed, I was grateful to have some many wonderful people stop by and visit the sculpture and chat with me. I have never been thanked daily for just being an artist. I was told, “Thank you so much for bringing your sculpture here” dozens of times. Attendees understand the conditions and how to tough it is to be out in the desert and the sense of comraderie was gratifying. Work continued…Every day the batteries that lit Transmigration at night had to be recharged. There were power outages, the camp ran short on water, but everything kept coming back together somehow. 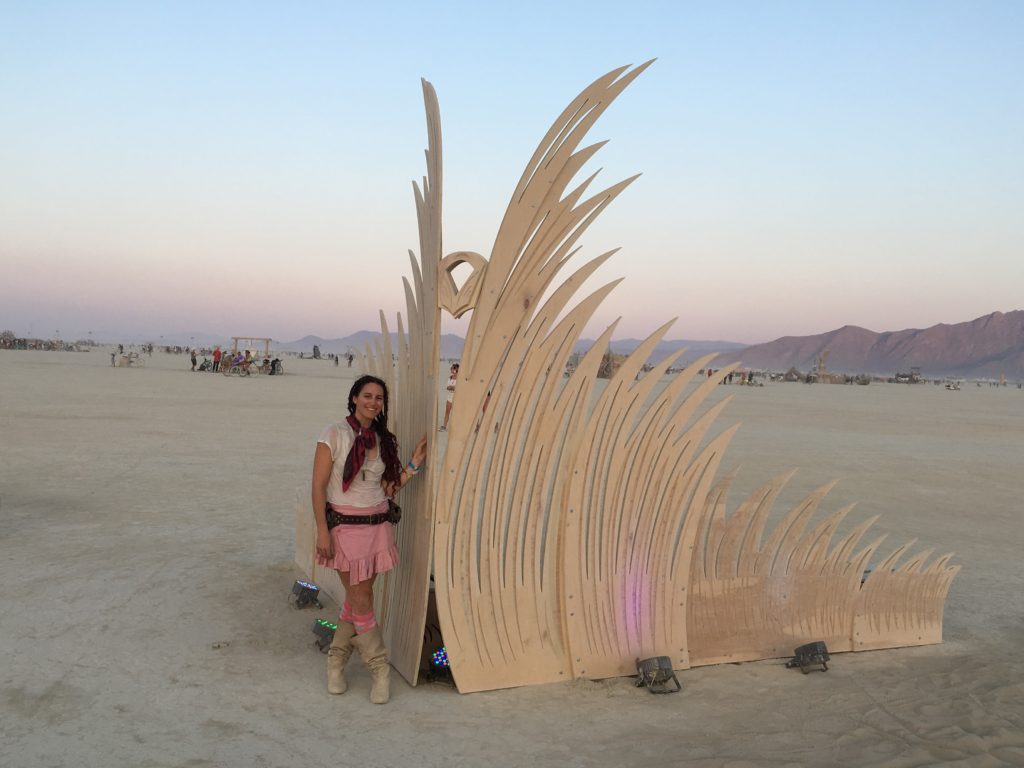 Sadly, management informed me that Transmigration would not be able to be burned due a mistake in processing our entry forms. How ironic that at an event with the word “Burning” in the title I could not actually burn the sculpture. Wrestling with a sense of disappointment, we decided to dismantle and burn the benches in the burn barrels and then bring the winged sides back to Chicago. 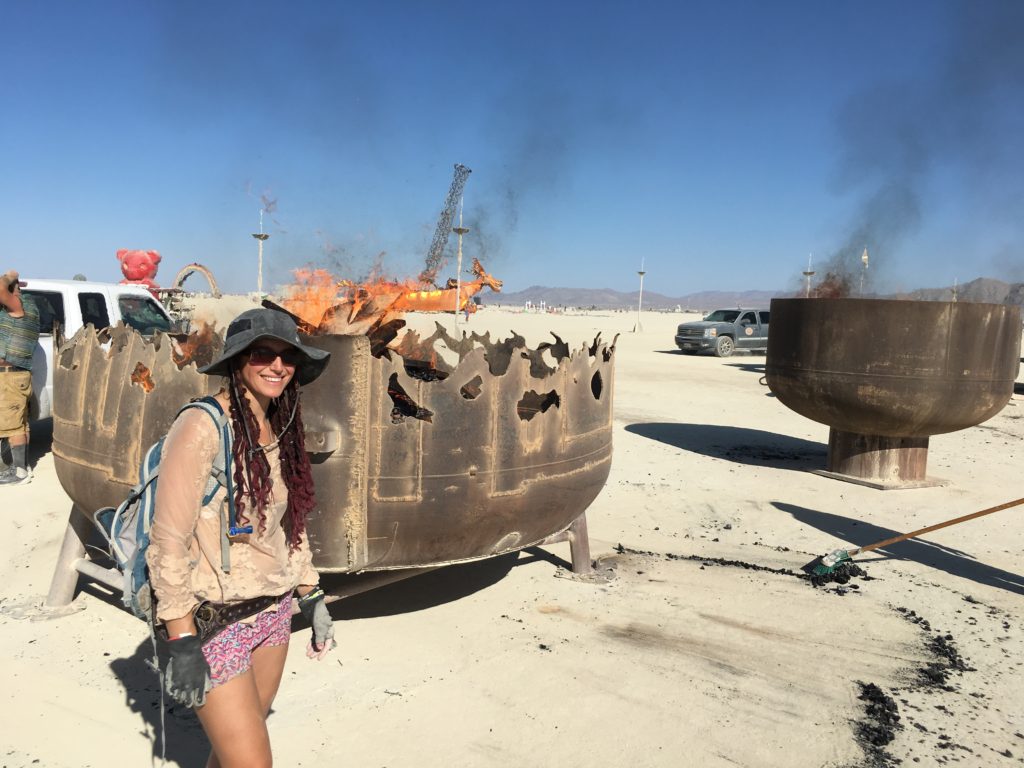 I would still like to burn them at an event, but at the moment, they are wrapped up and sitting in my studio. Having envisioned and designed it to burn, it still bothers me with a sense of the unfinished. A vision not fully realized. However, the experience far outweighed the disappointment. It was an adventure and it pushed me and my team to points of frustration and exhaustion that plateaued in a beautiful party on Thursday night. 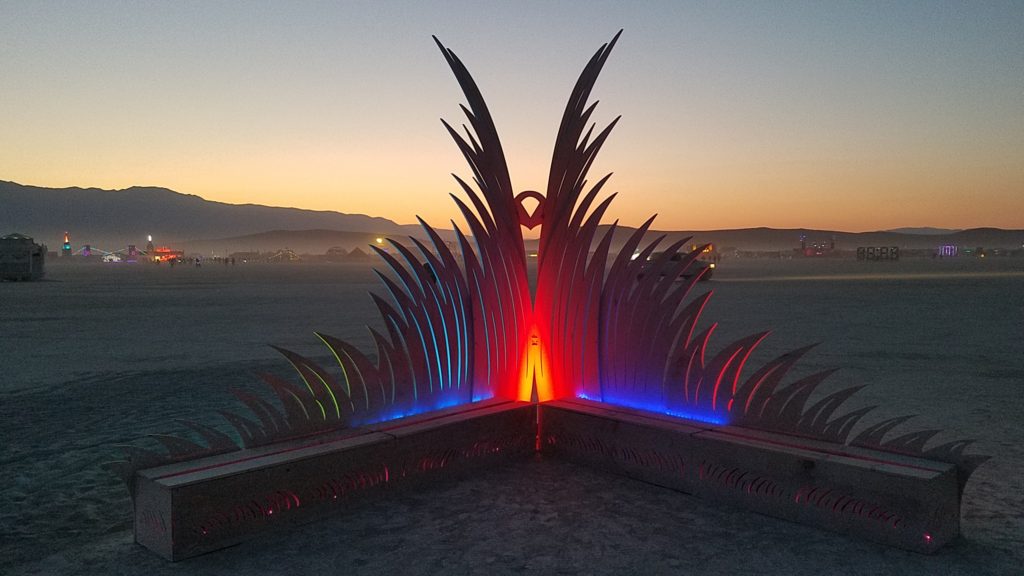 Arriving early and leaving late, means we witnessed the city of 75,000 plus being built and being torn down. A study in transience. So much energy expended for an event that lasted less than a week. I was very grateful for all the strangers who took pics of Transmigration and posted them on social media. And very grateful for the support of BAAAHS Chicago & San Francisco and my Black Rock City build team Zachary Fietsch, Greg Slade, Stafford Brannan, Shelby Stark, Peter Winkler, Shorty Belle, Aaron Oppenheimer, Jeff Krucek, Therron Ricks, Ted Barrus, Ido Beeri, Shlomi Barak, Solomon Hursey, Oscar Groves, Ethel Bourbon, Bryan Thurston, Kevin Trujillo, Elizabeth Love, Jeff Zelnio, Ben Stroh and for the generous support of my Indiegogo campaign donors. Thank you.